Android was first launched by Google in September 2008 as a mobile operating system for their range of mobile devices including phones and tablets. Unlike Microsoft Windows or Apple’s policies, Android was created as on “Open Source” model that meant that anyone could assist with its development, but anyone could also take the basic code for Android and make a ‘Fork’ to customise it to their own needs.

Android is now the most popular mobile operating system, with over 2 Billion active devices around the world (almost the same dominance as Windows 10 on computers and tablets in 2020.)

In the UK you can pick up a cheap and cheerful smartphone running Android for about £40.00, but most people probably spend £100-£200 for a device with better power, speed, battery life, safety, build quality and camera.  Top of the range models cost over £1000.

Buying an Android phone is a complicated decision because there are so many different choices available. Do you wish to find a good all-rounder for every day life? Would you prefer to keep to ‘Pure’ Android and so buy a handset made by Google (such as the Google Pixel), or what about the Market Leader Samsung who are known for quality and innovation (but whose phones suffer because so many Google Apps are duplicated by Samsung but cannot be uninstalled)?  My preference is to buy Motorola phones made by Lenovo. They have a great heritage, they are built solidly, they are priced fairly, they do not suffer from bundled software (bloating) and have some innovative features too. 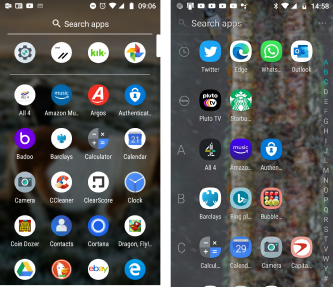 I recommend using Microsoft Launcher, especially if you use Windows 10. It is beautifully designed, effortlessly links your Android Phone with Windows 10, and provides several enhanced features compared to the standard Google or phone manufacturer’s launchers.

As a small example, the images on the left show the difference between how Microsoft Launcher shown on the right displays all the apps on your phone.

Standard Android Launchers show apps in alphabetical order filling whole pages that are swiped left or right - it is all a bit confusing.

Microsoft Launcher can be configured to show a clear alphabetical list that scrolls vertically.

#SeeTechMoreClearly specialises in configuring devices to suit your needs and to make using them simple and pleasurable.

Amazon Fire tablets run a customised version of Android that means they are much simpler and easier to use than normal Android based devices.

They include the standard Google Play Store so that all Android Apps can be installed and used on them, but they are also linked to the Amazon store which includes several special apps created by Amazon specifically for their tablets.

Amazon Fire tablets also include a special Browser to ensure that content is tailored specifically to the screen size and technology within the tablet, meaning that other Amazon Services such as Kindle Books, Audible audio books, Amazon Music and of course Amazon Alexa devices all work seamlessly.

All the services stated above for Android Devices are available for Amazon Fire tablets too.

Visits are available at no extra charge to addresses within 40 miles of our location near Wareham in Dorset, charged at £20.00 per hour, with set fees for half or full day sessions. Please enquire for services to other locations.

Remote assistance is available by telephone, or online via Skype, WhatsApp or remote controlled assistance for Windows Devices (requiring software to be installed,) charged at £10.00 per hour.

#SeeTechMoreClearly provides the following support and assistance with Android Devices: